Zostera and some Caulerpa 300m sth of Quarantine station

‘Directly opposite the Adelaide Speedboat Club I found evidence of seagrasses that appeared healthy but in small patches.

300 metres south of the Quarantine Station (Eastern Bank) found large areas of seagrass that appeared healthy & grasses that had the appearance of ‘dreadlocks or coconut husks’ – a layman’s identification.

Directly opposite the ASC shipbuilding found hundreds of Razor Fish anchored to the sandy bottom but photos taken were not clear’.

Dr Jason Tanner, SARDI after loking at Ted’s photos advised that it looks like a ‘mix of Zostera and Caulerpa at the Quarantine Station, but mostly Zostera…The speedboat club pictures are less clear.  The mid-top pic has 2 different things in it – the light green in the lower left is almost certainly Caulerpa, and the darker green could be Zostera.’ 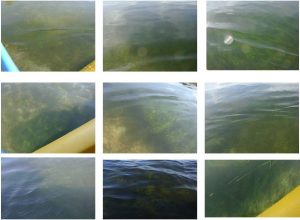