On February 2nd, two divers from BSAC Adelaide, and Steve Reynolds of the Marine Life Society, translocated adult oysters, and some juveniles, to the ECF’s Inner Harbour reef.

Native oysters were endemic to the Port River, as known from Kaurna history and shellfish middens, and the Port River Shellfish Restoration project has been working to restore this native species to the River.

Adult native oysters (Ostrea angasi) have been successfully growing out since May 2017, at 6 sites around the Port River.

The native oysters, and the many other shellfish in the River, lack substrate on which to establish themselves.

The ECF has therefore established a small subtidal reef, of bagged clean recycled shell, as a potential home for the native oysters. 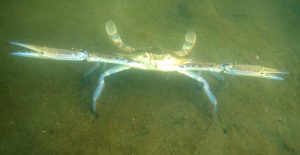 Fish around the reef

The divers reported that there were lots of small fish on the reef, and then lots of small and large fish after the oysters were in place; the growth on the oyster shells providing food.

The adult oysters have been growing out at Flinders Ports (Berth 8) and the Royal SA Yacht Squadron, while the juveniles were originally spat that stuck to our oyster baskets in the summer of 2018/19.

The ECF continues to grow out oysters at sites including the Cruising Yacht Club and the ASC and aims to establish a larger trial reef of limestone and shell (approx. $50K required).