In an election commitment, under the Labor Party’s proposed Urban Rivers and Corridors Program, the Port River has been nominated ‘a priority project’ with a $300,000 commitment.

A Living Shorelines project at Cruickshanks Corner, developed by the Estuary Care Foundation, with coastal engineers Wavelength Consulting, would be funded in that commitment.

The project would trial nature-based shoreline protection in response to the risks of flooding from rising sea levels and climate change.

The commitment was made in a Media Release and social media video by local MP Mark Butler.

‘Labor’s Urban Rivers program will assist the Estuary Care Foundation in its continued efforts to create a Living Shoreline in the Port, naturally revitalising the River, filtering pollutants, and ensuring our dolphin pod and other sea life flourishes’. 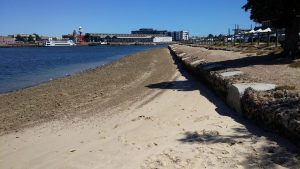 The Foundation welcomes the commitment to the Port River project and hopes that it can become a bilateral policy commitment.

Through their proposed Environment Restoration Fund, the Liberal Party has committed to help clean up and improve the water quality of the Yarra River, Swan and Canning Rivers, River Torrens, Brisbane River, Georges River and the Hawkesbury and Nepean Rivers.