Estuary Care Foundation volunteers built a small reef for native oysters in the inner harbour of Port Adelaide in December 2018, deployed some native oysters in February 2019 and found most of the oysters alive during a dive check, by BSAC volunteers, at Easter 2019.

The reef was made of coir bags, filled with clean recycled Pacific oyster shell, and some terracotta tiles.

On October 23rd, Dave and Chris from BSAC returned and found native oysters and a pinna. 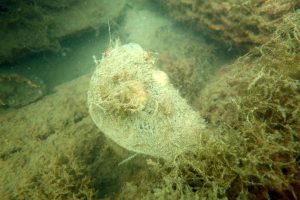 Dave and Chris found their views of the reef somewhat obscured by Zoobotryon verticillatum growing on our bags. It is an introduced colonial bryozoan and it is often mistaken for a seaweed of some type, but its an animal. It tends to gather all type of fine sediment on its body and tentacles so can be quite a range of colours.

Zoobotryon verticillatum has been recorded since the 1980s at Outer Harbour, Angas Inlet and Coffin Bay. It’s one redeeming feature seems to be that it filters water.

ECF is waiting on a PIRSA Permit to extend the reef, with a further 80 bags.