On Friday October 16th a second small reef was set at the southern end of the inner harbour, a further development of ECF’s Port River Shellfish Restoration Project

The reef was created from 35 coir bags of clean recycled oyster shell and topped with 44 native oysters that Rae Nunan, an ECF volunteer, has looked after at North Haven since they were spat in May 2018.

The reef site previously hosted native oysters in baskets and is now the site of an AusOcean rig that was built and deployed by Portside Christian College students. The rig has sensors for monitoring and an underwater camera, with wifi connection to the College.

The reef build was undertaken with the support of 8 different organisations, including Estuary Care Foundation. Key contributions included: 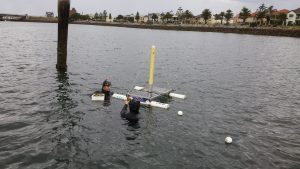